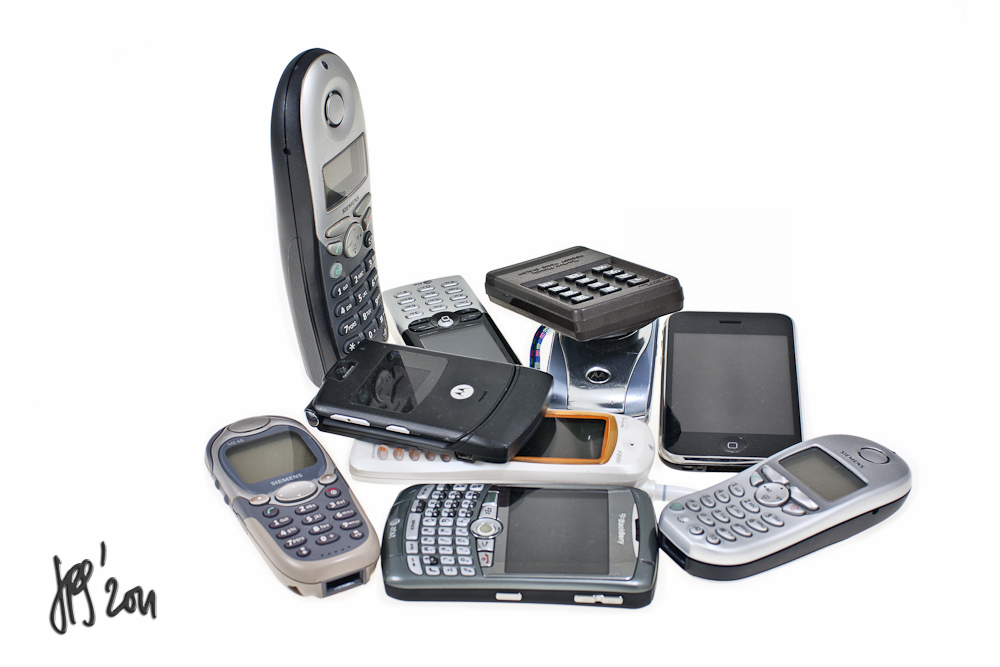 Houston; 6:47 a.m.:
In a suburban home, a boy runs into the kitchen.  His mother is preparing breakfast while shouting towards the staircase to her daughter, who is talking on her cell, telling her that she is going to be late. Her husband sits at the kitchen table, staring at his Smartphone.  He gets up and walks over to the refrigerator, while still staring at the phone, shakes his head, and starts to type.
Los Angeles; 7:57 a.m.:
Traffic is everywhere.  People are behind their steering wheels, their left hands leisurely covering their left ears, as if we can’t see the device in their hand, talking while frequently looking to the left and right, no cops, good, when does the traffic light change? There, the young guy in the convertible, phone in his right hand and typing, while occasionally looking up.
Chicago; 11:14 a.m.:
A meeting room on the 23rd Floor of a skyscraper crowning the skyline of the windy city. In the room are two men and one woman, sitting at a table.  A third man is standing in front of them, talking.  A projector, proudly erected in the middle of the table, throws a colorful image on the wall behind the speaker, who changes the visual in a monotone frequency, about every 1 minute and 16 seconds.  The man sitting close to the door is staring out the window but seems unmoved by the magnificent view of the city. The person on the opposite side is looking down, with his hand under the table; below the line of sight, he is typing a message on this mobile device.  The woman at the far end of the table has her head directed towards the illuminated wall but her eyes are on the half opened laptop in front of her.  On the wall, the glimmering pictures seem to change with every click of the small device in the presenter’s hand.  But they really don’t.  It is the same composition of bold header line and left-hand center box, with several lines of words all beginning with a bold dot; the right-hand center box shows a picture or a linear graph which at times has a positive slope but then, somewhat unexpected and certainly disturbingly, a negative slope.  Finally, across the bottom, in a print so small that it is difficult to read, we see a date on the left and a short series of words in the middle, something like a description.  Both never change.  On the right,we can see a very small number which increases incrementally, with the monotony of a clock, each time the presenter clicks on the control button.  Then there is another constant, located in the upper right hand corner; it is a colorful, mostly roundish conglomeration of forms and shapes.  It seems familiar.  Where did we see it before? Yes, down in the entrance to the building, then again in the office lobby, and on the non-descript posters along the corridor to the meeting room; they were spaced 74 inches apart.
New York City; 4:16 p.m.:
People rush down the street, looking at their cell phones; they are happy or indifferent but many seem confused or irritated.  Some are frantically typing messages on their slippery black communication tools; others speak into their phones, covering the device with their other hand.  The man across the street yells into his cell phone as if he is watching the World Series.  Over on the right, a young woman has a cable hanging from her ear like a vine in the jungle of Borneo.  And then there are the ones who somewhat autistically speak with themselves, having an inconspicuous apparatus stuck in their ear.  We hear brakes screech and a car horn blast on the left, where an executive in a slick pinstripe suit is crossing the street while staring at the display on his phone.  He looks up, disturbed by the noise, confused, lost, and finally upset, gesturing an obscenity towards the cab driver who pays him back in kind.
Now, go back to the first paragraph and replace Houston with Madrid.  In the second paragraph, delete Los Angeles and insert Bangkok.  In the next paragraph, take out Chicago and put in Hong Kong.  Finally, change New York City to Dubai.  The remaining text remains unaltered. Read it again. Think. Next sequence: Madrid becomes Tokyo, Rome replaces Bangkok, Los Angeles now reads Rio de Janeiro, and Dubai changed to Munich.  Read it again.  Think again.  Tokyo becomes Shanghai, Rome becomes.....
Never has the world communicated as much as we today; constantly, day and night.  We talk and type while we are walking, driving, writing, reading, running, watching, building, hugging, crying, playing, eating, and soon, who knows, even while sleeping.  We talk and we type.  In February 2010, the U.N. telecommunications agency reported that the number of mobile phone subscriptions worldwide have reached 4.6 Billion.  One year earlier, the Radicati Group estimated the number of e-mails being sent per day to be a staggering 247 Billion, or 2.8 Million per second.  And that was two years ago.  Facebook now proudly states that it has over 500 million users communicating while, in February 2010, Twitter posted 50 million tweets per day.  In September, a mere seven months later, the activity rose to 90 million per day. Since October of 2007, Apple sold over 41 million iPhones over the past three years since inception. Let us think about the following:

With all the talking and typing,
are we still listening and comprehending?

I seems “listening” is in the process of migrating from being a primary cognitive function to an increasingly rare talent - like walking on a tightrope 25 feet high.  In business we observe every day after many meetings, phone calls, and messages that our people remain uncertain, questioning, wondering, and confused; many are going a step further by misunderstanding, which results in mistakes, possibly aggression or capitulation.  We experience similar patterns of behavior when looking at consumers as we need to add, to the active communication, the countless passive messages we are exposed to: The television in the kitchen in the morning, the magazine we flip through on the train, the radio during our car ride, and the internet pages which are part of our life throughout the day.  In any given 24 hours, we are exposed to up to 12,000 images.
Implications
On a personal level, we need to step back and think about the balance between talking, typing, and listening.  When was the last time we sat at the breakfast table with our partner and our children without reading the paper, answering e-mails, speaking on the phone, or with the TV set barking in the background?  Instead of listening to our loved ones and thinking about what they have to say? There is a significant difference between talking and having a dialogue.  Relationships are built on understanding which requires the art of listening.
On a professional level, we are faced with a significant leadership challenge.  We are spending a considerable amount of time initiating or responding to communication.  At the same time we observe and often discuss how we can get people engaged and motivated to contribute to the goal.  A common strategy is to increase communication.  While generalizations often lead to inadequate opinions, I am compelled to argue that, in most cases, an increase in communication is not the appropriate solution to the problem.