N ature is beyond all teaching.

Renowned for its art, history, and evocative landscape, Tuscany is a region where the past and present merge in pleasant harmony. Hill-towns gaze across the countryside from on high, many encircled by Etruscan walls and slender cypress trees. Handsome palaces testify to the region’s wealth while medieval town halls indicate a long-standing tradition of democracy and self-government.

Of all the fairest Cities of the Earth none is so fair as Florence … Tis the Past contending with the Present; in turn each has the mastery.

In the countryside, among the vineyards and olive groves, there are hamlets and farmhouses, as well as fortified villas and castles that symbolize the violence and intercommunal strife that tore Tuscany apart during the Middle Ages. Several imposing castles and villas were built for the Medici family, the great patrons of the Renaissance who supported eminent scientists, such as Galileo.

Northern Tuscany, and the heavily populated plain between Florence and Lucca, is dominated by industry, with intensively cultivated land between the cities and the wild mountainous areas.

The area centered around Livorno and Pisa at the height of its powers dominated the western Mediterranean from the 11th to the 13th centuries. Its navy opened up extensive trading routed with North Africa, and brought to Italy the beenfits of Arabis scientific and artistic achievement.

During the 16th century the Arno estuary began to sit up, ending Pisan power. At the heart of central Tuscany lies Siena, which was involved in a long feud with Florence. Its finest hour came with tis victory in the Battle of Montaperti in 1260, but it was devastated by the Black Death in the 14th century and finally suffered a crushing defeat by Florence in the siege of 1554~55.

Northeastern Tuscany, with its mountain peaks and woodland, provided refuge for hermits and saints, while the east was home to Piero della Francesca, the early Renaissance painter whose timeless and serene works are imbued with an almost religious perfection.

Florence – beautiful monument to the Renaissance

The City was central to the Renaissance, the artistic and cultural reawakening of the 15th century. Writers such as Dante, Petrarch, and Machiavelli contributed to its proud literary heritage, though it was the paintings and the sculptures of artists such as Botticelli, Michelangelo, and Donatello that turned the city into one of the world’s greatest artistic capitals.

While the Etruscans had long settled the hills around Fiesole, Florence first sprang to life as a Roman colony in 59 BC. Captured by the Lombards in the 6th century, the city later emerged from the Dark Ages as an independent city state. By the 13th century a burgeoning trade in wool and textiles, backed by a powerful banking sector, had turned the city into one of Italy’s leading powers.

Political control was wielded first by the guilds, and later by the Florentine Republic. In time, power passed to leading noble families, of which the most influential were the Medici, a hugely wealthy banking dynasty.

Florence, and later Tuscany, remained under the family’s almost unbroken sway for three centuries. During this time the city was at the cultural and intellectual heart of Europe, its cosmopolitan atmosphere and wealthy patrons providing the impetus for a period of unparalleled artistic growth. Artists, sculptors, and the architects flocked to the city, filling its streets, churches and palaces with some of the world’s greatest Renaissance works. Bu 1737 the Medici had died out, leaving the city under Austrian (and briefly Napoleonic) control until Italian Unification in 1860. From 1865 to 1871 Florence was the capital of Italy. 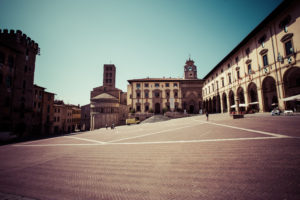 For those who have finished with Florence, and want to explore the rest of Tuscany, the classic traveler’s route runs either due south – to the vineyards of Chianti, the towers and Palio of Siena and San Gimignano, the hill towns between Montalcino and Montepulciano – or west to Pisa, Lucca and the coast. Aside from Cortona – a lovely town popularized, and in high season very nearly ruined, by Frances Mayes’s well-meaning memoir Under the Tuscan Sun – eastern Tuscany gets far less attention.

That is a huge bonus for those who do make it to the region’s vibrant little capital, Arezzo, just an hour by train from Florence. They come to this half-forgotten corner, in steady but never excessive numbers, drawn mostly by the joyful frescoes of the Renaissance artist Piero della Francesca, and discover a city rich in art and architecture but mostly free of crowds.

As well as being an attraction in its own right, Arezzo is also the jumping-off point for the Casentino valley, an area dotted with Romanesque chapels, medieval castles – one of which hosted Dante – and good restaurants. Two important Franciscan sites, the monasteries of La Verna and Camaldoli, lie high in the wooded mountains that ring the valley.

Eastern Tuscany’s main provincial capital is a bit of a diamond in the rough. Economic prosperity (the town is one of the main centres of Italy’s gold jewellery industry) has given it a halo of light industry and ring-roads, but once you get past the outer gauntlet, what a good-looking centro storico it has.  Add some fine restaurants and wine bars, and the presence of what is arguably the single most essential artistic draw in the whole of Tuscany – Piero della Francesca’s Legend of the True Cross fresco cycle – and it’s a must on any Tuscan road or railway trip.

Its historic heart is, at first, hard to read, because where you would normally expect the town centre to be – at the high point where the main roads converge – lies a placid municipal park, with the ruins of the Medici fortress on one side, the Duomo on the other, and the countryside stretching away below and beyond.  Like the punchline of some Buddhist parable, Arezzo expresses itself in the getting there rather than the arrival, not radiating from a central piazza like so many Tuscan towns but draping its centro storico like a jewel-studded necklace across the side of a hill. 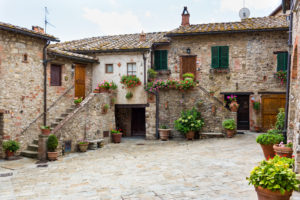 Those who want to discover the splendors of the Tuscan countryside will be delighted by the amazing cultural and natural treasures of the whole area. Whether by car, on foot, by bike or on horseback, Tuscany offers myriad opportunities if you are looking to dive into a centuries-old culture immersed in beauty.

The landscape of Chianti looks like it was drawn by hand. Visitors can tour along many itineraries spotlighting forests, vineyards, hamlets and special districts. Don’t miss the Chianti gems around Siena such as Radda, Gaiole, Castellina and Castelnuovo Berardenga. But there’s also the Chianti fiorentino: Barberino Val d’Elsa, Greve in Chianti, San Casciano in Val di Pesa and Tavarnelle in Val di Pesa boast rolling hills and vineyards you can enjoy sipping a glass of fine wine. As you cross the territory, you’ll find castles, hamlets, solitary abbeys and history-filled villa-farms.

Crete Senesi is a fascinating area, characterized by shapes sculpted from an ever-changing sea of clay. The thermal baths of Rapolano and the truffles of San Giovanni D’Asso are just some of the wonders that this area offers.

In the heart of the land surrounding Siena, you’ll find the Val d’Orcia, a perfect landscape characterized by rolling hills, cypress groves and the sinuous flow of its river. In this authentic treasure chest filled with stunning natural beauty, you cannot miss the historical centers of Pienza and Montalcino. Take a walk through the woods of Vallombrosa to discover enchanting trails that will lead to abbeys built in ancient times.