Mount Rushmore, located just north of Custer State Park in South Dakota’s Black Hills National Forest, was named for the New York lawyer Charles E. Rushmore, who traveled to the Black Hills in 1884 to inspect mining claims in the region..

When Rushmore asked a local man the name of a nearby mountain, he reportedly replied that it never had a name before, but from now on would be known as Rushmore Peak.

A bill introduced in Congress in 1937 proposed that a carving of Susan B. Anthony’s head be included among the luminaries at Mount Rushmore, but fell through due to a rider on the existing appropriations bill mandating that federal funds be spent only on those carvings already begun.

Seeking to attract tourism to the Black Hills in the early 1920s, South Dakota’s state historian Doane Robinson came up with the idea to sculpt “the Needles” into the shape of historic heroes of the West. He suggested Red Cloud, a Sioux chief, as a potential subject. In August 1924, Robinson contacted Gutzon Borglum, an American sculptor of Danish descent who was then working on carving an image of the Confederate General Robert E. Lee into the face of Georgia’s Stone Mountain. Luckily for Robinson, the headstrong Borglum was on the outs with the group that had commissioned the Lee sculpture, and would soon abandon the project. Borglum suggested that the subjects of the South Dakota work be George Washington and Abraham Lincoln, as that would attract more national interest. He would later add Thomas Jefferson and Theodore Roosevelt to the list, in recognition of their contributions to the birth of democracy and the growth of the United States. 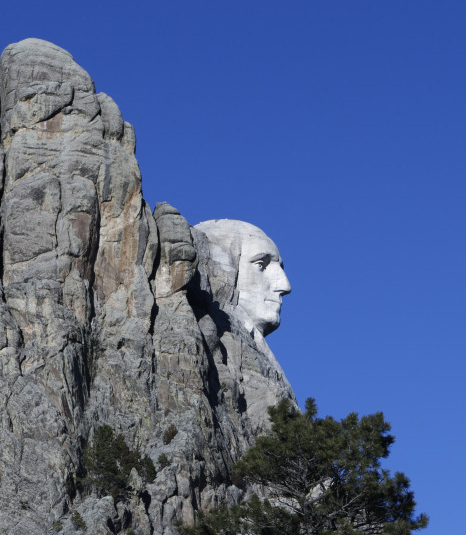 Sculpting the Presidents at Mount Rushmore

During a second visit to the Black Hills in August 1925, Borglum identified Mount Rushmore as the desired site of the sculpture. Even as local Native Americans and environmentalists voiced their opposition to the project, deeming it a desecration of the natural landscape, Robinson worked tirelessly to raise funding for the project, aided by Rapid City Mayor John Boland and Senator Peter Norbeck, among others. After President Calvin Coolidge traveled to the Black Hills for his summer vacation, the sculptor convinced the president to deliver an official dedication speech at Mount Rushmore on August 10, 1927; carving began that October. In 1929, during the last days of his presidency, Coolidge signed legislation appropriating $250,000 in federal funds for the Rushmore project and creating the Mount Rushmore National Memorial Commission to oversee its completion. Boland was made the president of the commission’s executive committee, though Robinson, to his immense disappointment, was excluded.

To carve the four presidential heads into the face of Mount Rushmore, Borglum utilized,  in addition to the more traditional tools of drills and chisels, new methods involving dynamite and pneumatic hammers. Some 400 workers removed around 450,000 tons of rock from Mount Rushmore, which still remains in a heap near the base of the mountain. Though it was arduous and dangerous work, no lives were lost during the completion of the carved heads.

Mount Rushmore as a “Shrine of Democracy”

On July 4, 1930, a dedication ceremony was held for the head of Washington. After workers found the stone in the original site to be too week, they moved Jefferson’s head from the right of Washington’s to the left; the head was dedicated in August 1936, in a ceremony attended by President Franklin D. Roosvelt. In September 1937, Lincoln’s head was dedicated, while the fourth and final head–that of FDR’s fifth cousin, Theodore Roosevelt–was dedicated in July 1939. Gutzon Borglum died in March 1941, and it was left to his son Lincoln to complete the final details of Mount Rushmore in time for its dedication ceremony on October 31 of that year.

Mount Rushmore National Memorial, known as the “Shrine of Democracy,” has become one of the most iconic images of America.